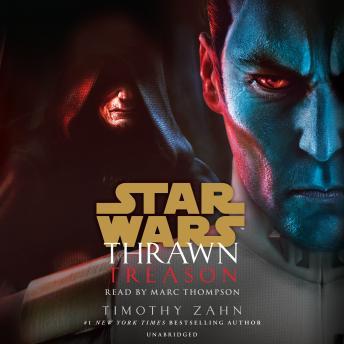 The long time ago, there was a young boy named Thrawn. He was born on the planet Artorias, where he quickly learned that the Empire would never let him go. Thrawn joined the Imperial Academy at an early age and eventually rose through the ranks to become Grand Admiral of the Imperial Navy.

Thrawn: Treason is the sequel to Timothy Zahn's novel Heir to the Empire and follows the continuing story of Thrawn's rise to power, along with his mastery of both art and strategy in galactic warfare. The novel begins three years after the events in the previous book and focuses on Thrawn's struggle to consolidate his power, as well as his continued search for Force-sensitive children from which he can create new mass terror troopers.

[']If you are a Star Wars fan, this is the perfect audiobook to download. The narrator captures Thrawn's personality really well and the audiobook includes a lot of extra information as well. I did not know that there was going to be a Thrawn movie so it was nice to get a thought-provoking story without all the science fiction.

Thrawn: Treason (Star Wars) by Timothy Zahn is an excellent story about Thrawn, the most feared and cunning commander in the galaxy. In this book, he pursues his enemies relentlessly to get them caught.

"I have no doubt," he said, "you are familiar with Admiral Thrawn." "Of course," I said, nodding. "You're the one who destroyed the Imperial fleet at Bilbringi." "Yes," he said, bowing. "That was quite a day. I would like to take this opportunity to commend you on your accuracy in identifying me from my disguise as a Bakur soldier."

Thrawn was a character that readers loved in the Star Wars universe. Timothy Zahn wrote Thrawn: Treason, one of the most beloved and top-selling Star Wars novels. Marc Thompson has done an absolutely amazing job in narrating this story. Pushing his voice to pull on the emotions of the narrator is brilliant and makes reading much more enjoyable.