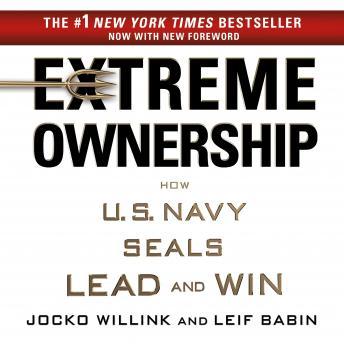 [Leif Babin Jocko Willink, U.S. Navy SEAL] applied for a job as a SEAL specifically to be able to lead and win, to help others lead and win in turn. For Willink, the most important lesson he learned in his four years as a SEAL was that 'leadership is about taking responsibility for something bigger than yourself'.

Extreme Ownership: How U.S. Navy SEALs Lead and Win is a guide for anyone who wants to lead their team to success by taking total responsibility for the direction of their life, as well as the performance of themselves and those around them.

This audiobook is about leadership and how leaders can succeed. It covers many topics such as the importance of having a support system, role models, life-changing moments, and situational awareness.

In this non-fiction memoir, Willink and Babin share the secrets to SEAL leadership. They use an explicit example of the Battle of Mogadishu in 1993 when a small number of American forces showed up at the last second to stop a Somali regime intent on killing nearly 300 innocent civilians. The book is divided into three parts: Leadership, Mission, and Culture.

The book is about the US Navy's most elite and legendary warriors, U.S. Navy SEALs, who have evolved into the premier military force of the modern era. They are known as an unstoppable fighting machine who was at the forefront of most of America's wars over the past two decades. The book not only reveals how astonishingly successful these elite warriors are in any given situation but also provides a blueprint on how they can improve their own performance, too.

One of the takeaways from this book for me personally is that we need to step up in our leadership positions. We need to be more confident and be able to lead with confidence into situations where we are at risk of failure.