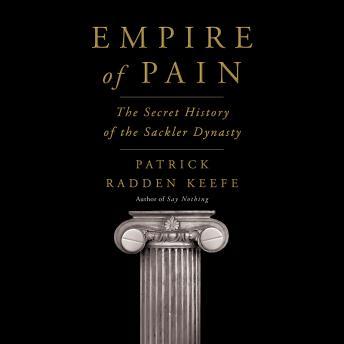 Empire of Pain is the unending story of how the Sackler family, owners of Purdue Pharma and executives of some of America's most powerful cultural institutions, have managed to insulate themselves from any accountability for creating America's opioid epidemic. It is a shocking tale - if it were not so tragically ordinary - that traces the rise to power and irresponsibility of members of one American dynasty.

In the new book Empire of Pain: The Secret History of the Sackler Dynasty, author Patrick Radden Keefe offers a gripping account of how the family behind Purdue Pharma got rich off addiction and a ruthless brand of marketing.

Empire of Pain: The Secret History of the Sackler Dynasty is a well-researched book with many interesting revelations about the history behind how Purdue Pharma, the company behind OxyContin and other opioids, has been able to make such an enormous profit during its time.

In his meticulously researched and beautifully written work, [Patrick Radden Keefe] unveils a forty-year history of the Sackler family empire that is as gripping as it is shameful. From their early days in China, where they first came up with the idea for OxyContin, to the present day and their various empires around the world--not to mention the ongoing opioid addiction crisis--[Radden Keefe] delves deep into how this family transformed pain into profit.

The Sacklers are the third richest family in America. The 20th-century Sacklers amassed a personal fortune of $13 billion by selling pharmaceuticals, mostly opioids. It's also been alleged that they have created a culture of addiction as a way to increase profits.

A family made its fortune in the manufacture of OxyContin and now controls 80% of the world's opioid supply. They've been able to do this because they've married their philanthropy and pharmaceutical businesses, providing an opiate fix for the very worst of America's ills.